Birding In The Smoke 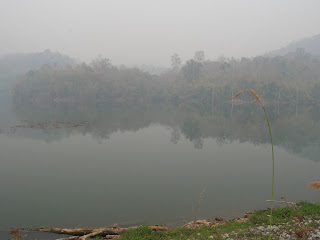 Yesterday morning I was joined by Uthai Cheummarang from Chiang Mai Birding  http://www.chiangmaibirding.com/, rather than head for the temple we decided to visit a small reservoir which is surrounded by forest around 15km outside of Chiang Dao. However the area was pretty quiet, large areas of the forest had been recently burnt and the rest was dry and fairly leafless. Visability was also very poor due to the numerous forest fires which currently plague Northern Thailand. However we did manage some birds, best was an Asian Stubtail feeding just off the path, we also saw several White-browed Piculets, Siberian Blue Robins, Eurasian Jay, Yellow-bellied Warbler, Rufous-fronted Babbler, White-crested Laughingthrush, Blue-bearded Bee-eater, many Lineated Barbets, Puff-throated Babblers and a Crested Serpent Eagle. Scrub around the reservoir held several Thick-billed Warblers and along the shore single Green Sandpiper and Little Heron were noted.

On the way back we stopped off at the hot springs in Chiang Dao, as soon as we got out of the car we could see a large flock of White-rumped Munias drinking and bathing on a nearby marsh, amongst these we were surprised to see two female Pin-tailed Parrotfinch. Also in the area were a dozen Cattle Egrets amongst the grazing water buffalo, at least four Grey Wagtail and 35 Chestnut-tailed Starlings in nearby flowering trees.
Posted by Neil Lawton at 9:37 AM