Up on the roof

Spent from dawn until midday up on the old rooftop restaurant at Malee's hoping to see some overhead passge of raptors and passerines. It was not until nearly 10:30am before the first raptors were recorded when a group of 5 Amur Flacon moved north followed over the next hour by a further six. The only other migrant raptor was a splendid adult male Pied Harrier which headed high south over the forest. Local raptors included a Shikra and at least 5 Crested Goshawk including several displaying males.  The only passerines possibly on the move were 17 Olive-backed Pipit. The surprise bird of the day was a male Grey Buschat in the garden the first time i have seen this species so low down and presumably a migrant. 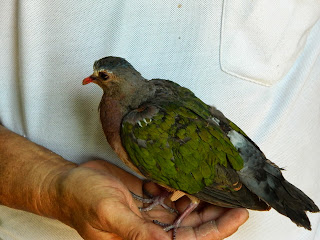 Early in the morning an Emerald Ground Dove few into a nearby window, knocking its self out, after a couple of hours rest in a cage it was later released unharmed.

A late afternonn walk up to the temple added Scaret Minivet and Yellow-vented Flowerpecker to the list moving the total on to 65 species.