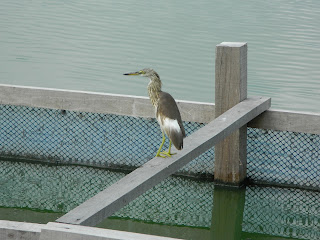 No new posts for a few days as internet has been out of action for five days, combined with celebrating our wedding anniversary, wife's birthday and nursing a hangover (rare these days). On both Saturday and Sunday morning I wandered around the local patch, the biggest surprise was shortly after arriving on Saturday morning a Flamingo flew over high heading south, it looked like a greater but views were distant. I do not know what the origins of the bird is, I don't think it is on the Thai list and it is most likely an escape, though it was fully winged and looked in good condition, I am sure many of the zoo's and bird parks in Thailand keep them, the nearest ones to Suphanburi I am aware are held at the bird park in Chai Nat.