There was no sign of the European Starling Saturday morning, but bizarrely in the same area an immature Rose-coloured Starling was present with the same flock of Pied Mynas, the second new Starling for the patch in a week! Though slightly more common than European Starling, it is still a scarce/rare winter visitor to Thailand, with the only other one I have seen being at the rubbish dump at Leam Pak Bia in 2014.

A smart male Cotton Pygmy Goose was also noted, this used to be much more frequent up to a few years ago, but has become scarce since the conversion of several fish ponds to rice paddies. The Eastern Buzzard was still present as were up to 287 Grey-headed Lapwing. A single Baillion's Crake was seen well but briefly, along 5 Ruddy-breasted Crake and a Watercock.

The number of waders around the site were fewer, but did include a Greater Painted Snipe and 8 Pin-tailed Snipe.  A wander through some dry paddies and scrub produced at least 3 Bluethroats and 4 Thick-billed Warbler.

A full list of species seen can be found on EBird

The European Starling was still present this morning, though the numbers of Grey-headed Lapwings were a little lower, there was still at least 279 present, possibly more but the flock was mobile repeatedly being flushed by workers.


A female Eastern Marsh Harrier was present on and off throughout the morning and a very vocal Eurasian Wryneck showed exceptionally well. A mixed flock of Baya, Asian Golden and Streaked Weaver fed in a patch of tall grass, along with at least 10 Red Avdavat.

The local patch at Suphanburi, was full of birds yesterday and I managed to record a total of 93 species which included three, possibly four new birds for the site.

Perhaps the biggest surprise among these was a Common Starling though, a familiar bird back home, in Thailand it is a scarce if not rare winter visitor and a species I have seen once before in Northern Thailand at Chiang Sean. The other new species included an Eastern Buzzard, Large Hawk Cuckoo and possibly Lesser Coucal, but I am not sure if I have seen this species previously here, I will have to check back through my notebooks. 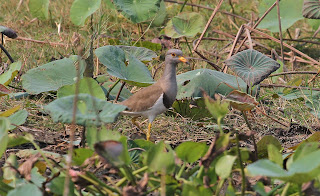 Up until a few weeks ago water levels on the site had been very high, but as levels have began to fall over the past couple of weeks, large numbers of waders have moved onto the site, most impressive among these was an exceptional count of at least 351 Grey-headed Lapwing which was over three times higher than the previous best count. Other waders included 350 Black-winged Stilt, 164 Little Ringed Plover, 4 Temminck's Stint, 3 Common Sandpiper, 4 Common Greenshank, 25 Spotted Redshank and 230 Wood Sandpipers.

Other waterbirds included 16 Yellow and 2 Cinnamon Bittern, 2 Purple Heron, 3 Ruddy-breasted Crake and a single Watercock. I made an effort to count as many over the overwintering warblers as possible resulting in some impressive totals which included 18 Dusky Warbler, 41 Black-browed Warbler, 70 Oriental Reed Warbler, 9 Pallas's Grasshopper Warbler and 4 Lanceolated Warbler.

A full species list can be found on Ebird http://ebird.org/ebird/view/checklist/S33010372 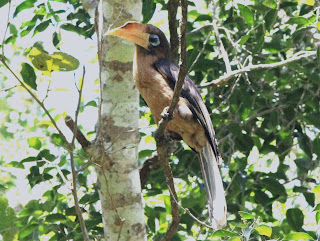 January 31st to Feb 2nd was spent birding with friends on the coast at Leam Pak Bia/Pak Thale, late afternoon on the 31st we visited an area of rice paddies and scrub inland from Pak Thale, whilst birding here we found a small group of birds feeding in a lone tree on caterpillars, they included a Green-billed Malkoha, Plaintive Cuckoo and several Myna's, among them was a medium sized black and white bird, partly obscured, after a few minutes it appeared out in the open and we were surprised to find that it was a Pied Cuckoo also known as Jacobin Cuckoo. I had seen this species previously in India and Africa, but never in Thailand, where it is a rare breeder in very small numbers at Beung Bhoraphet during the wet season, where its host is Striated Grassbird. This appears to be the first winter record for Thailand. A return visit to the area the next day failed to relocate the bird. 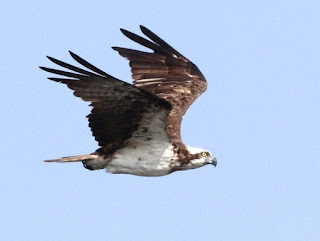 Back on the coast at Leam Pak Bia/Pak Thale a great selection of waders were seen, as well as an Osprey, good numbers of Painted Stork, Barred Buttonqail and Indochinese Bushlark.
Posted by Neil Lawton at 4:25 AM 1 comment:

On Jan 23rd we arrived at our resort at Khlong Lang, just outside Mae Wong National Park, late in the afternoon in glorious hot sunshine, little did we know how things would change in the next few days. Before dawn next morning we headed into the park and towards the Chong Yen Campsite, stopping at a flowering tree on the way were we saw several Coral-billed Scimiter Babbler and a pair of Striated Yuhina. Carrying on towards the campsite, it did not take long before we hit low cloud and thick fog, things were even worse at the campsite with visibility of just 20-30 meters and temperatures creeping just into double figures.

We hung around the campsite at Chong Yen for several hours, the Flavescent Bulbul's keeping us amused for a while, followed by a pair of Silver-eared Mesia. In a slightly brighter spell of weather we ventured down the Umphang Trail, a number of fruiting and flowering trees, attracted  a nice selection of species, which included a very obliging Small Niltava, Speckled Piculet and several Black-throated Sunbird. Species seen in a fast moving, mixed species feeding flock included, Golden-throated Barbet, a male Clickling Shrike Babbler, Lesser Racket-tailed Drongo, Yellow-cheeked Tit, Claudia's and Davison's Leaf Warbler, Sulphur-breasted Warbler and a White-tailed Robin. By mid-afternoon the fog closed in again, so we decided to head down the mountain in search of better weather, finding only more rain and fog, things were brighter but wet at the resort and we abandoned birding for the day, convinced the weather could not be any worse the next day.
At dawn we again headed into the park, it felt cold, but the fog wasn't as bad, we saw a great selection of pigeons at a stop on the way, with Wedge-tailed, Pin-tailed and Thick-billed Green Pigeon and Mountain Imperial Pigeon in one fruiting tree, along with at least four fly over Barred Cuckoo Dove. Higher up the mountain the weather deteriorated further, becoming colder, winder and wetter, we stopped at a blind which overlooks a stream, a few birds were present here including several Streaked Wren Babbler, 2 White-tailed Robin, a pair of Buff-breasted Babbler, Blue Whistling Thrush and a Hill Blue Flycatcher.

After an hour and with hypothermia beginning to sent in we left and headed to Chong Yen where the weather was even worse, with heavy rain strong winds and temperatures at 10am of just 7 degree's Celsius, common sense prevailed and we headed back to the resort, seeing 15 Kalij Pheasant on the way down. The rest of the day and the next were spent trying to keep warm, birding around the resort and at nearby Khlong Lan Waterfall, in between spells of heavy rain and strong winds. We managed to find a few birds, including a surprise Forest Wagtail at the resort, where we also saw Pale-legged Leaf Warbler, several Asian Brown Flycatcher and Brown-throated Sunbird and during a short visit to Khlong Lan Waterfall an Eye-browed Thrush and a male Hill Blue Flycatcher. 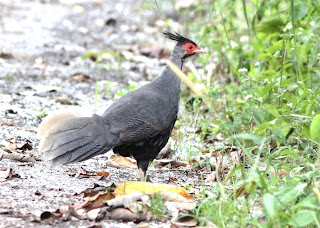 Towards the end of our stay here, it was increasingly apparent that the extreme weather was taking it's toll on some birds, with large numbers of Swallow and Red-rumped Swallow sitting around on the grass at our resort and in the road, many in a weak condition, later we went on to find several dead. The extreme weather effected much of Central and Northern Thailand and was probably the coldest spell of weather for many years, with many reports of dead hirundines, swifts and smaller birds, at one point the weather was warmer in the UK than over much of Thailand!. 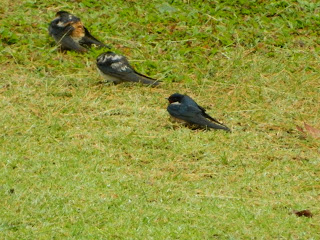 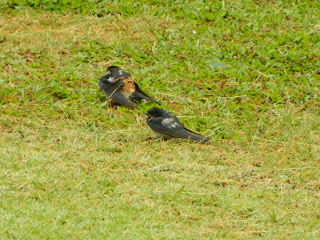 Posted by Neil Lawton at 9:00 AM No comments:

As it was relatively close to Nam Nao, we spent 22nd till 24th January at Phu Hin Rong Kla National Park, the last stronghold of the Thai communist movement. Our stay here was blighted by low cloud and fog, we had hoped to see Nepal House Martin and Jerdon's Bushchat  by the Taberg Checkpoint, but with visibility of just a few feet it was impossible to see anything. We entered the park after paying an extortionate 500THB entrance fee, per person, for which we were not even given a park leaflet and many of the park signs were in Thai only, clearly this park wants to keep all foreigners away!.


We stayed in one of the national Park bungalows, which was basic, but adequate, spending much of the time birding along the entrance road and quieter side roads. Along the main road we found a pair of Striped-breasted Woodpecker, a male Slaty-backed Flycatcher and a mixed group of Silver-eared Mesia and Blue-winged Minla. A couple of decent walks along the side road leading to the loop trail was the most productive, with the best birds here being a group of at least 15 Long-tailed Broadbill and a very vocal Rusty-naped Pitta, which despite calling from the side of the road failed to show. Other species seen/heard here included Fork-tailed Drongo Cuckoo, Blue-throated, Blue-eared and Great Barbet, Speckled Piculet, Swinhoe's and Long-tailed Minivet, Clickling Shrike Babbler, Claudia's, Davison's and Sulphur-breasted Warbler and Yunnan Fulvetta.
The campsite and park HQ was less productive, but a fruiting tree did attract a good selection bulbuls including Mountain and Black. Also seen around the campsite were huge numbers of Large-billed Crow scavaging in the dustbins, with lots of Olive-backed Pipit and smaller numbers of Eye-borwed Thrush also feeding under the pines. Other species present in the area included large numbers of Striated Swallow and Cook's Swift, Black-winged and Indochinese Cuckooshrike, Grey-backed Shrike, Pied Bushchat and Green-billed Malkoha.
Posted by Neil Lawton at 2:32 AM No comments: