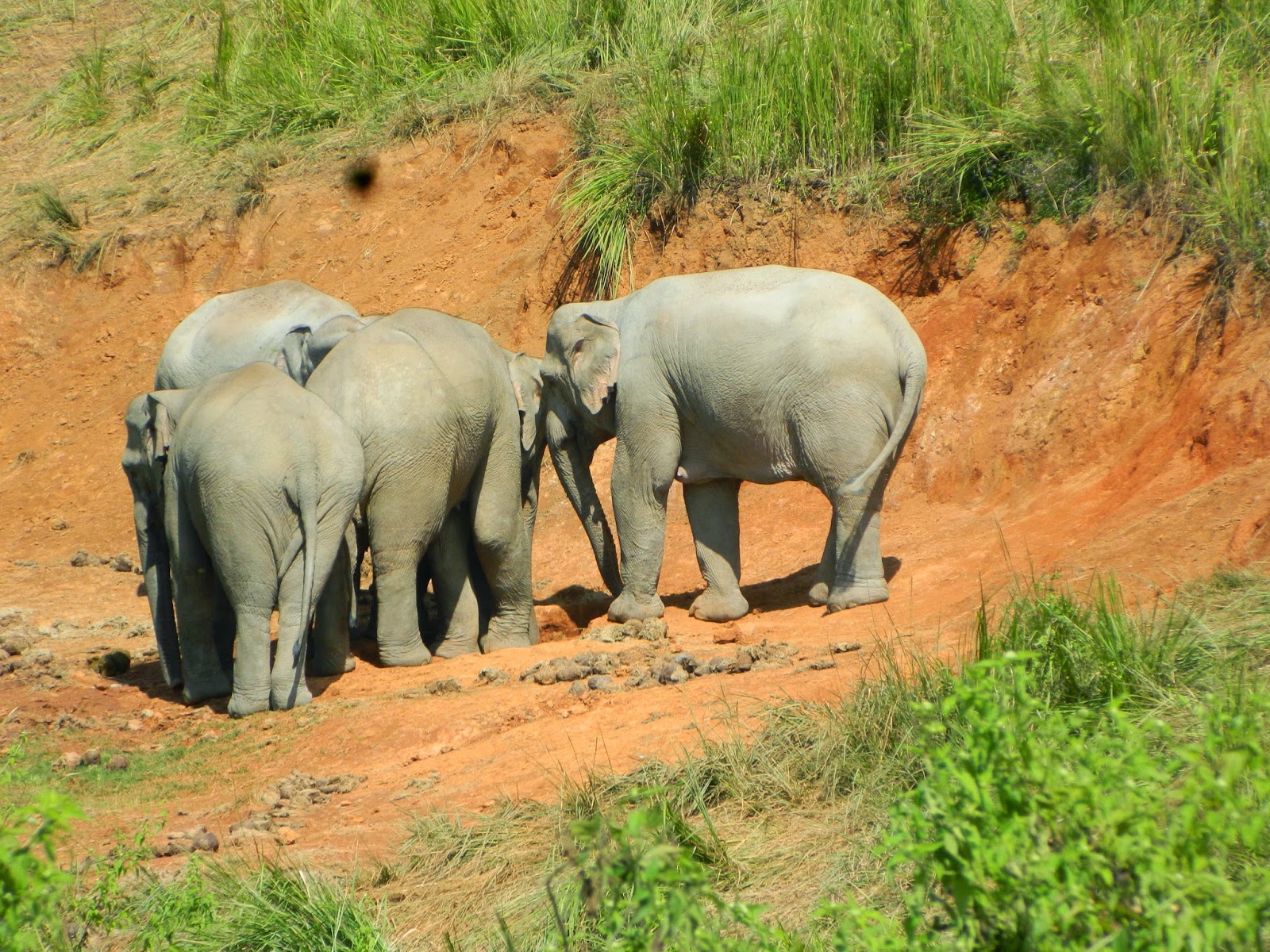 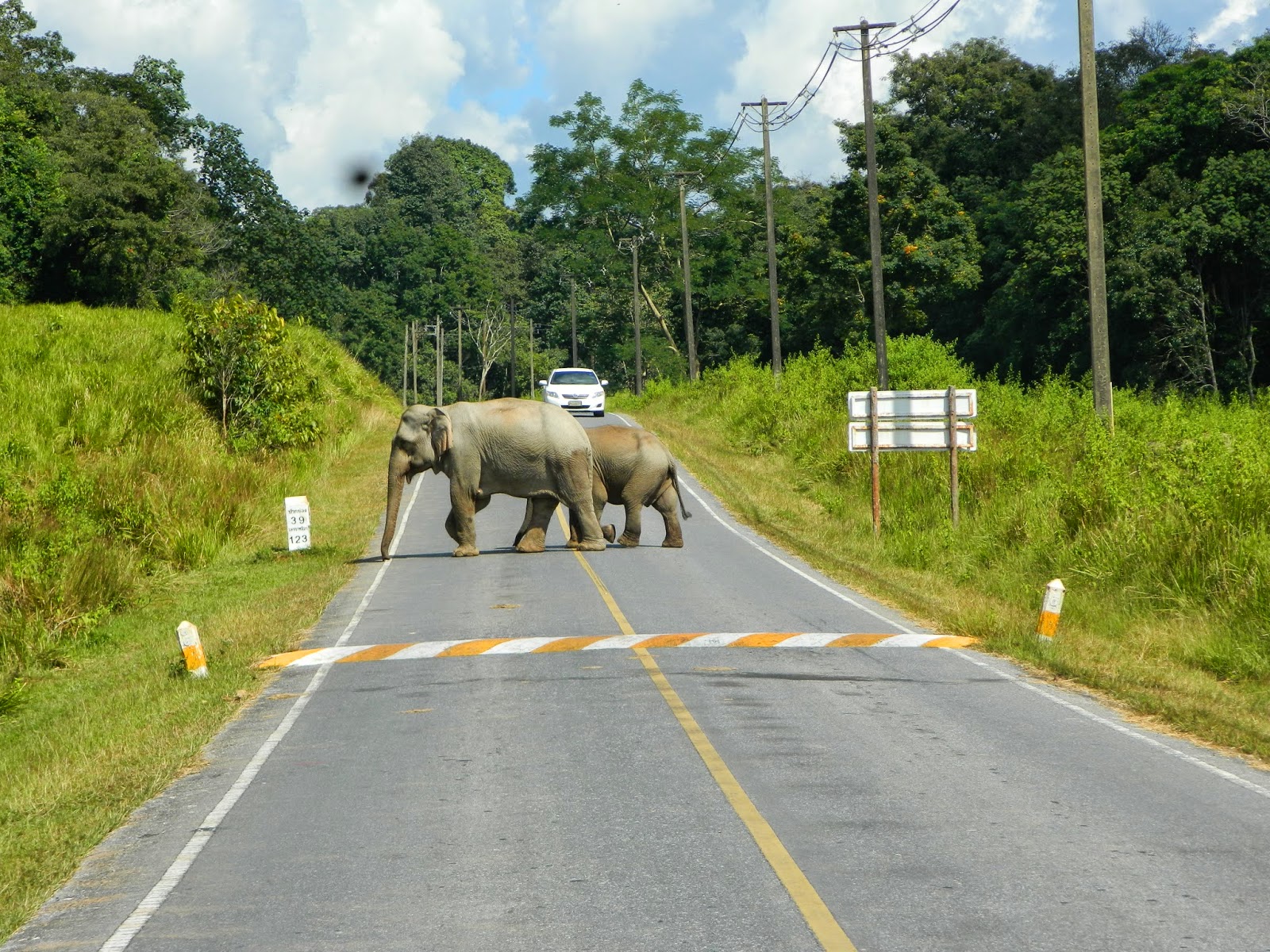 November 11th-13th, we spent four days birding at Khao Yai National Park, we stayed outside the park at Balios Resort, there were a few birds in the resort grounds, including a singing male Pied Bushchat and good numbers of Red-breasted Parakeets flying over, with small numbers in dead trees near the hotel each day from late afternoon.

We entered the park each day at 6am, as soon as the park gates opened, paying the very high 400 Thai Baht entrance fee each day. The first few hours were spent birding along the entrance road and various view points, by 9am the entrance road resembled a formula 1 grandprix circuit we then headed to the quieter parts of the park. The birding was hard work, made worse by the large numbers of leeches en-counted, We did however see some good birds, at our first stop on the first morning a pair of Great Hornbill flew into roadside trees and posed for photographs, a bit further along the road we found two groups of Siamese Fireback, with another group found on one of the trails the next day. Along the lower parts of the radar road we found a male Silver Pheasant, several Orange-breasted and Red-headed Trogon, a mixed group of White-crested, Black-throated Laughing-thrush and Large Scimiter Babbler. Large numbers of Hill Myna and several Golden-crested Myna were seen daily in flowering trees, along with lots of Vernal Hanging Parrot. Disappointingly very few raptors were seen with the best single Changeable Hawk Eagle and a Rufous-bellied Hawk-Eagle. Whilst watching birds come in and out of a fruiting tree  a smart male Siberian Thrush appeared briefly before disappearing of into the forest.

We also did reasonably well for mamals with two Yellow-throated Martin in the road early one morning, a small family party of White-handed Gibbon in trees above our head and a group of Asian Elephant crossing the road, early one afternoon on the way out of the park.

Having not been to Khao Yai National Park for a few years, I was surprised how busy the park was, even in the week, by 9am the entrance road begins to get very busy and by late morning, there is a constant stream of cars, motorbikes, mini bus heading towards the HQ, many travelling at high speeds, resulting in several monkeys being killed by cars. It is also becoming increasingly difficult to get onto the trails, with several now closed one due to poisonous insects and those that are open are poorly maintained and for which additional permits and guides are now needed. I stood reading one of the no access signs at the start of a trail and was told very rudely by a park official not to go on the trail, not to park along the roadside, he then continued with more abuse in Thai, some of which i understood, apparently us westerners stink! he soon shut up when i called him a Water Monitor Lizard in Thai.  The park is a world heritage site, but the park officials do not seem interested in the parks wildlife or those that come to see it, with proposals to turn the entrance road into a duel carriageway to cope with the volume of traffic, the future of the parks wildlife must be in doubt. Is Khao Yai still worth visiting?, probably, but the increasing hassles make it less attractive, avoid weekends and public holidays at all costs and don't expect a friendly Thai welcome by park staff.  In contrast staff at Nam Nao and Mae Wong National Park, were helpful, friendly and seemed interested in the parks wildlife
Posted by Neil Lawton at 7:27 AM