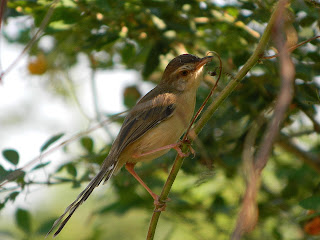 This morning like the previous two one of the commonest birds on the patch was Plain Prinia, which is best described as abundant, with the whole site probably supporting several hundred birds. With a the rice being wet from a heavy dew many of Zitting Cisticola were sat sunning on the bunds between the paddies, with groups of up to a dozen all over the site.

The only new butterfly today was a single Peacock Pansy.